Yesterday and today celebrate a couple of people but I only have eyes for one. (The other is Ed Vedder.) Every year I try to imagine how little Marco growing up in Rome had to fight for his birthday with that other guy. But he … END_OF_DOCUMENT_TOKEN_TO_BE_REPLACED

Happiness is a choice. “Thought is like a little boat upon the sea,” and you are the storm. Don’t let anybody tell you otherwise. First, thank you to Norm of Thursday Doors fame for the featured photo and one more in today’s gallery. Amore showing … END_OF_DOCUMENT_TOKEN_TO_BE_REPLACED

If you pass this door in Piran, Slovenia, you have my permission to draw something. It’s ours.

This is Piran cemetery doors. Do not write on it. It’s pretty.

Now to the united colours of Rome.

Two Monteverde favourites. I’d love to live behind this one. 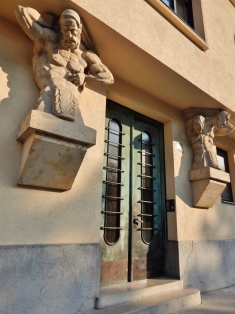 Now over to Ljubljana, Slovenia. It’s full of strong men.

Another National and University Library entrance. I’ve posted the horse-shaped handle yet. 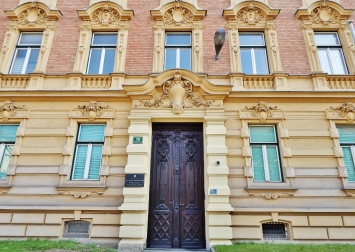 Whereas this is the police station in the centre of Ljubljana. Sister brought here a found phone.

On the way to Rožnik, a popular weekend hangout of Ljubljana natives. 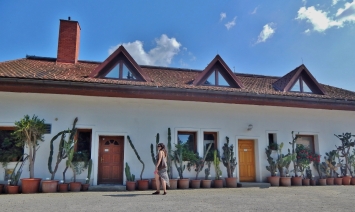 The Door of Complaints in Slovenian House Figovec restaurant. No wonder it’s empty. Right: “From juniper to gin.” Bottom: “The hideout of the naughty ones.”

The beauty of a friend.

Žužemberk Castle, one of its many passages.

A fine door of Bolsena.

The first thing I saw at the Mestre bus station near Venice. This is Italy too. 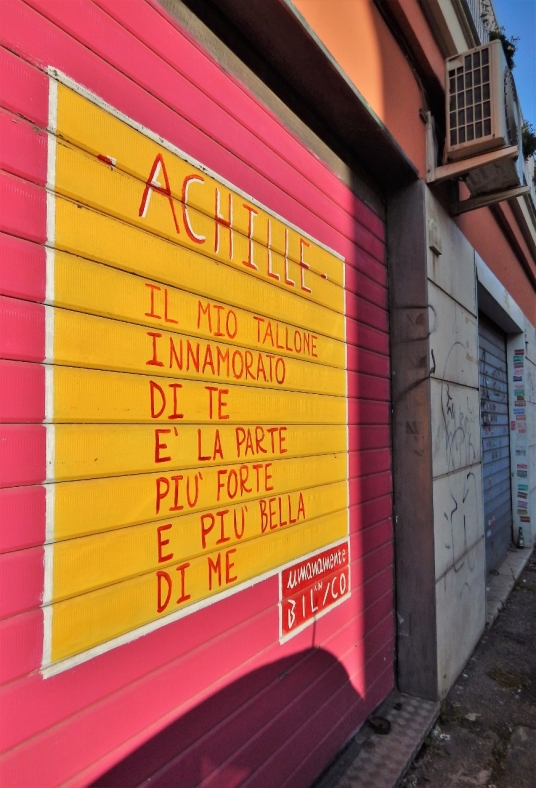 Poetry of another kind in Rome: “Achilles – My heel, which is in love with you, is the most beautiful and strongest part of me.” 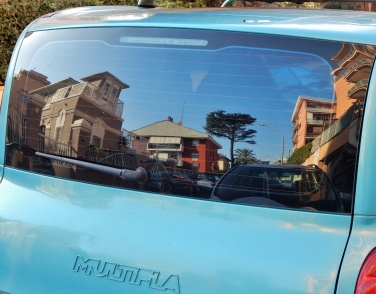 Maybe this is what they mean by Multipla: not the most aerodynamic car but it has multiple uses. Rome’s Monteverde. 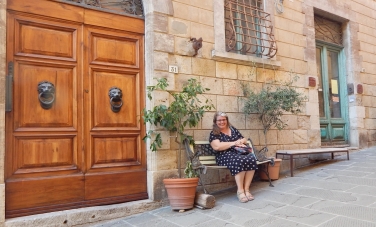 Photo by: Norman Frampton, with thanks. In Massa Marittima.

Look on every exit as being an entrance somewhere else. ― Tom Stoppard, “Rosencrantz and Guildenstern Are Dead” (quotation reblogged from One Million Photographs) It was exactly a month ago that I was forced to combine challenges and today I have to again, even though … END_OF_DOCUMENT_TOKEN_TO_BE_REPLACED

Live and let die, and then remember. Let’s go all poetic today. Do you know how you sometimes can’t tell exactly what a Latin proverb means? Is memento mori remember the dead or remember to die? In any case, I see it as the imperative … END_OF_DOCUMENT_TOKEN_TO_BE_REPLACED

Gornji trg in Ljubljana in August: compared to what follows the light is gentle but still pretty.

The view from my grandmother’s place in Maribor above the Drava river.

From my first and only sailing trip to Croatia in a previous lifetime.

Piran, the catcher of the last light.

It invites you out to play.

It makes you take a peek.

It opens the doors.

It makes paintings out of not much.

In Lucca there is much to behold. Guinigi Tower with oaks on top.

The last light of that day in Lucca. The sun said: Okay, one more. 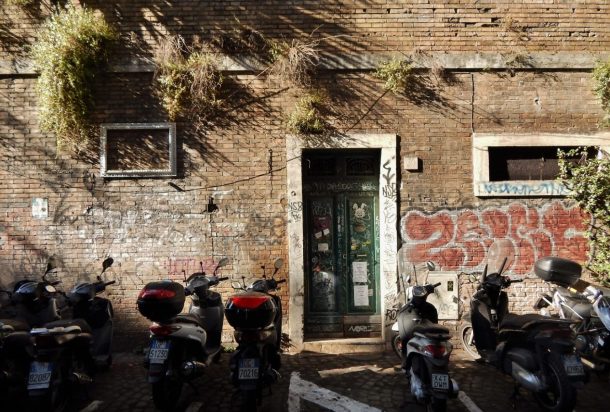 In Rome the light is harsher. Trastevere. 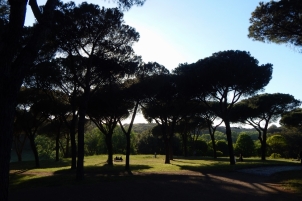 It doesn’t matter where in Rome you are. You get the light.

Closer to home the light mellows: the view from the archaeological park at Roselle. 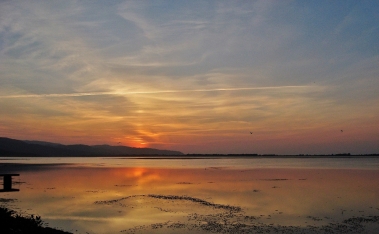 The Orbetello lagoon where flamingos come for the winter.

The same lagoon as the light was blocked.

The Capalbio beach out of season.

The Abbey of San Galgano is the light queen and this is my knight.

The more pictures I take, the more it becomes obvious that all I do is follow the light. The best is to catch it before it says good night when they say it’s golden, so I do. This magical gallery starts in Ljubljana, Slovenia, where … END_OF_DOCUMENT_TOKEN_TO_BE_REPLACED

Today five examples of standing out – or is it blending in? – in images by three. Because Leya asked for it.  First, this door from Piran looks stonewashed. It wasn’t me. Maybe it was the snail army to help conceal their spy. Second example … END_OF_DOCUMENT_TOKEN_TO_BE_REPLACED 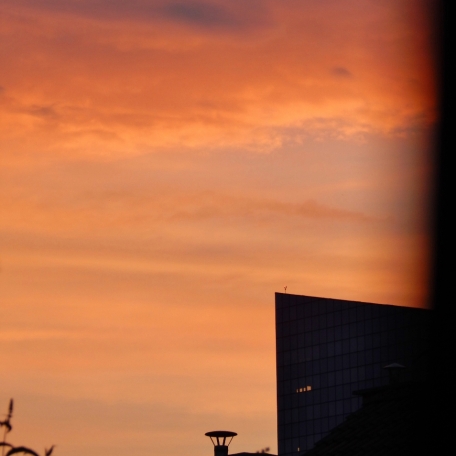 Imagine if the world was only pink.

Or only blue. Pretty but something is missing.

Something pinkish this way comes. 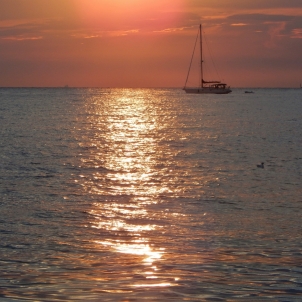 Just be sure to keep the percentage.

What happens if there is too much balance.

El Pastel It’s as if the pinks and blues only get to play early in the morning or late in the day. Whoever came up with this gender segregation must be slightly upset every time the sun sets or rises and the colours display how … END_OF_DOCUMENT_TOKEN_TO_BE_REPLACED

Leya wrote “Fences” in the title of her challenge, which is not to say that the singular form would have prevented me from posting twenty of them, as is my norm. But first, I was amazed to discover – only now, as it sometimes happens – … END_OF_DOCUMENT_TOKEN_TO_BE_REPLACED

After two months in my Slovenia I have only two words: thank you. I know that this challenge is called Pic and a Word but as usually I’m exaggerating: many more words and pictures than one on how my gratitude feels and looks like. Words … END_OF_DOCUMENT_TOKEN_TO_BE_REPLACED 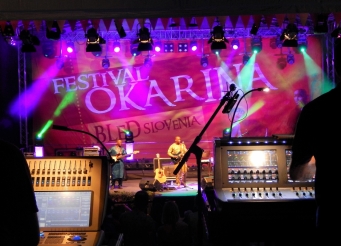 Let’s start with two photos from the Okarina Festival in Bled. 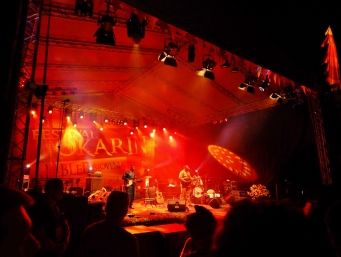 We went to two concerts. These are from the night with Vieux Farka Touré from Mali.

This is what I call well-lit. The National and University Library in Ljubljana.

Piran is constantly well-lit at dusk with competing colours.

Our garden in Ljubljana happy in the rain after a drought. The autumn was coming.

The colours of Ljubljana centre: the Ljubljanica river and the pink church. 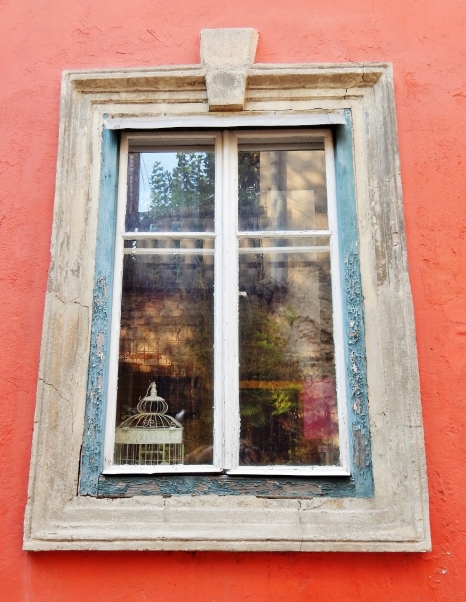 I love this burst of colour. 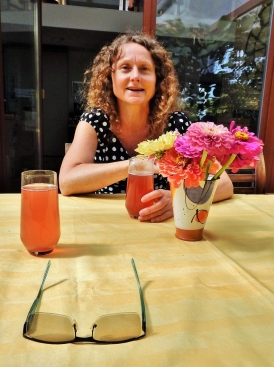 A friend in the assortment of oranges.

Mom’s gifted cousin gifted us (and painted) this painting

The sea in Piran is not always such colour. I think it was after a cooling-down since almost nobody was swimming.

And this was after a downpour. Mom and Piran wear matching outfits. 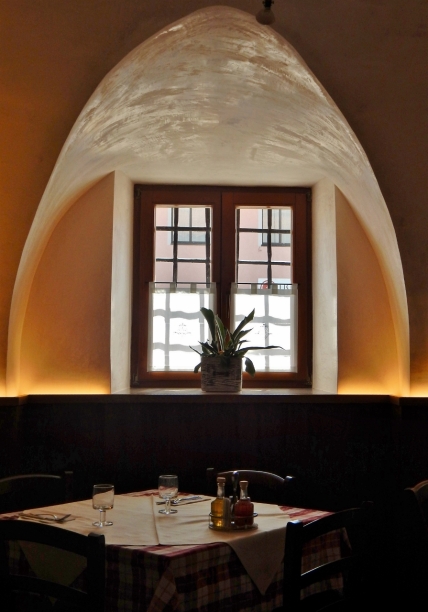 Colourful Lokev church that the priest (on the left) opened for us to view. 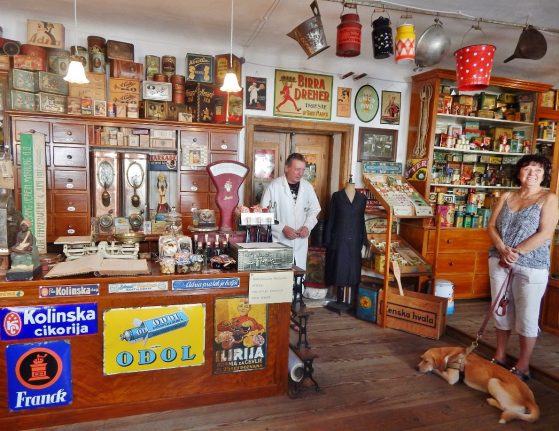 August: The colours of the past: Fabiani Museum Shop in Lokev with curator Miro. 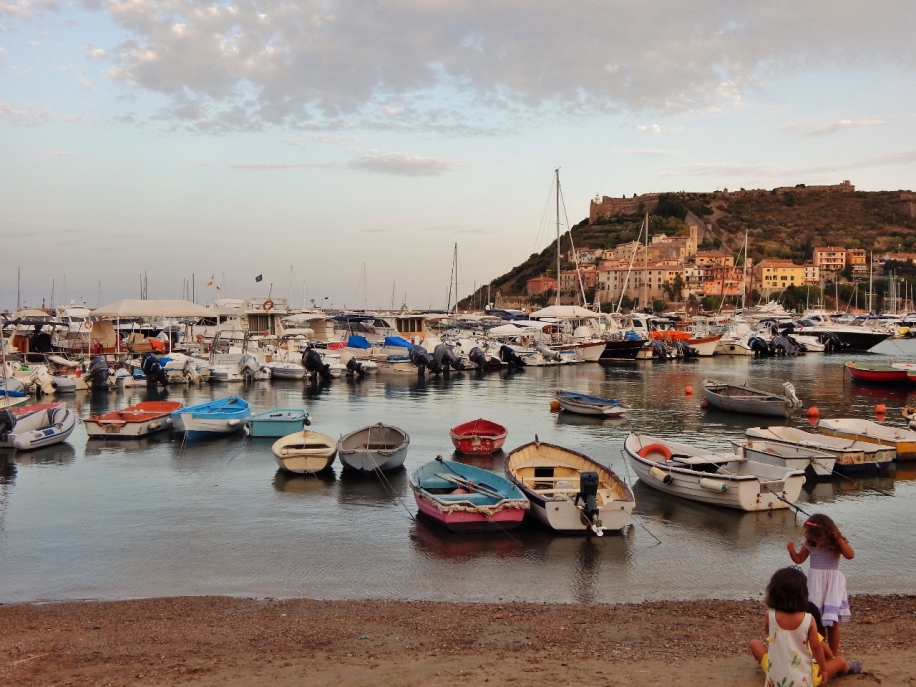 The return to the Italian colour palette: Porto Ercole. Soon.

Another August is going with the wind and with it my last chance to post last year’s August photos for my 2017 Calendar.  My blog is full of colours at any given time. That’s why I was happy when I saw the theme of this … END_OF_DOCUMENT_TOKEN_TO_BE_REPLACED

This month the A and I Poetry Challenge prompts us to write a heart poem. Since I’m waiting to be reunited with amore, this was not a hard task. Here is a look back at the two weeks we spent together in Slovenia before he … END_OF_DOCUMENT_TOKEN_TO_BE_REPLACED

Let’s start in Bežigrad, on the way to the bus stop where I must have walked a million times. 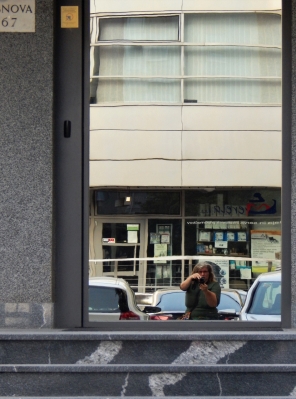 I don’t remember these mirrors though.

I like this poster and the mirror makes me look ultra thin.

Faculty of Arts where I studied English. 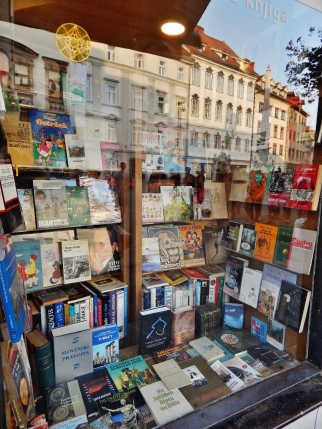 On Miklošičeva Street lurks the most striking Ljubljana building.

Towards the end of the walk I found this bubble and was ready to blame it for everything that is wrong with this world.

End of Ljubljana. I like to look at windshields as if they were big screens. 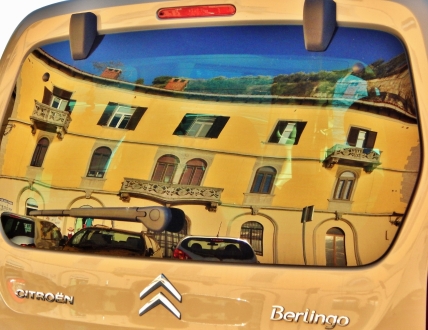 Start of Piran. This was the beginning of a glorious sunset.

That same evening: I like this kind of subdued selfies. 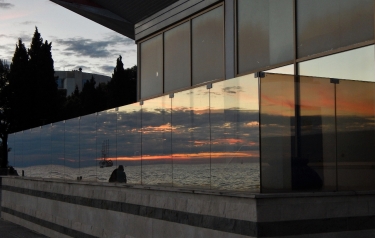 A sunset with a boat.

It was Dolphin Day but none were in sight. I guess they don’t like the rain. 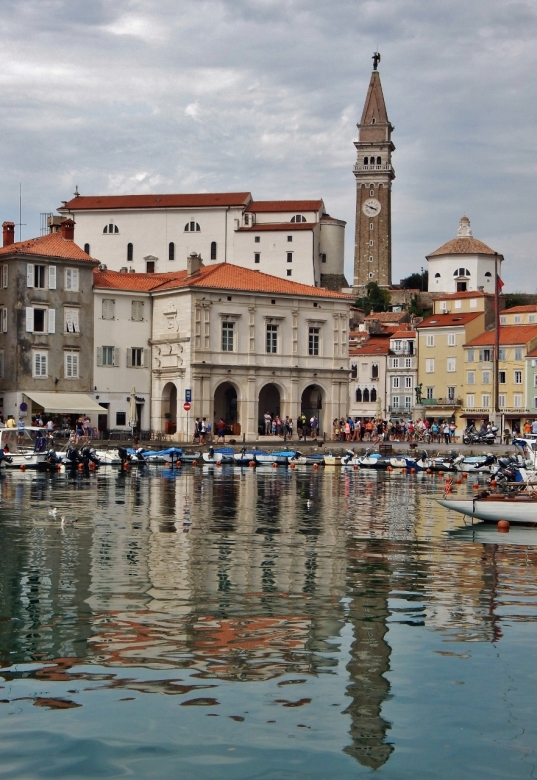 …whereas this one truly is leaning quite a bit and nobody glorifies it: Črni Kal.

Museum shop Fabiani in Lokev. Selo is a brand name here but it also means “village” in Croatian. 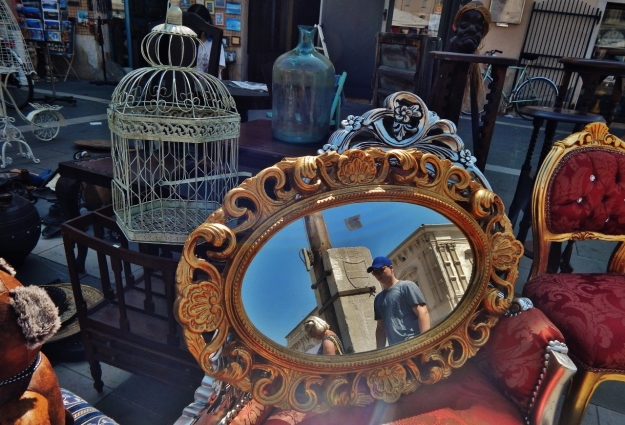 The Tartini Square hosts antique sellers every last Saturday in the month. 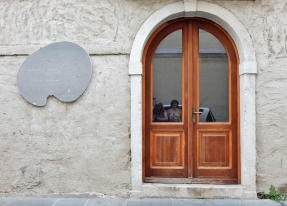 Main stars of this movie are a bit tired.

Since I’ve taken part in all three previous weeks of this challenge, here is week 4 as well. I shall stick to only one of Cee’s components, namely reflection. Here is Cee’s original photo for week 4 of her Fun Foto Challenge, upon which we … END_OF_DOCUMENT_TOKEN_TO_BE_REPLACED

This is my cat collection from my first month in Slovenia for the new edition of Lens-Artists Photo Challenge on the subject of soft. Even though I have a dog, I like cats because they know what it means to live in the present. 😉 … END_OF_DOCUMENT_TOKEN_TO_BE_REPLACED

I had several internal giggles observing this summer’s advertising campaign of Slovenian second city. Took some guts to pitch it and win. So for this week’s Pic and a Word challenge I choose glimpses of it from two locations, with an explanation in a sort … END_OF_DOCUMENT_TOKEN_TO_BE_REPLACED

Oh yes, it comes to those who wait: holidays! Here are some relaxing times from last July for my Calendar 2017. And for this week’s Lens-Artists photo challenge, where Amy asks us for photos of how we or somebody else relaxed. Last July I was … END_OF_DOCUMENT_TOKEN_TO_BE_REPLACED

Piran before taking off. 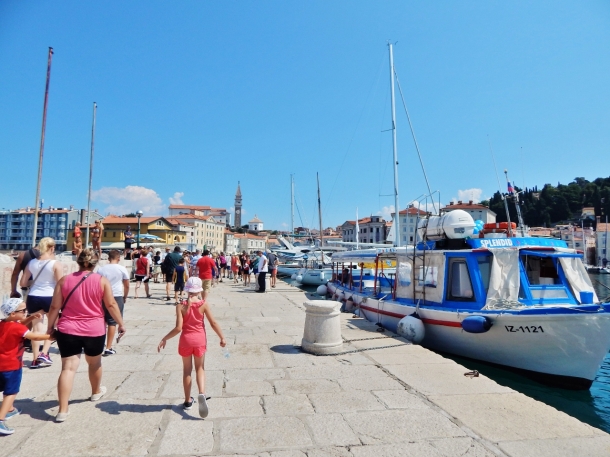 They forgot to stop the passengers at the end of the pier for document-checking. We had to return. 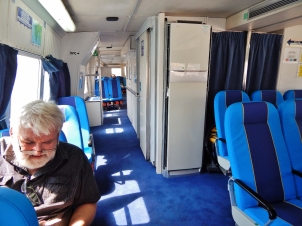 Italians in hard-hats. I’d be afraid. 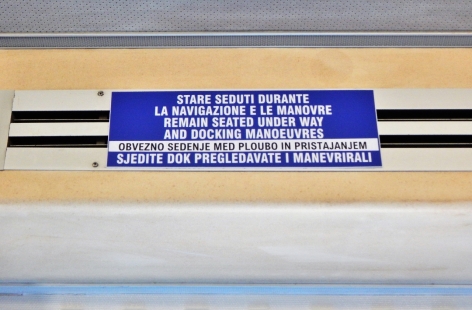 Trieste through the windows full of salt.

Trieste is pretty. More photos in due time. 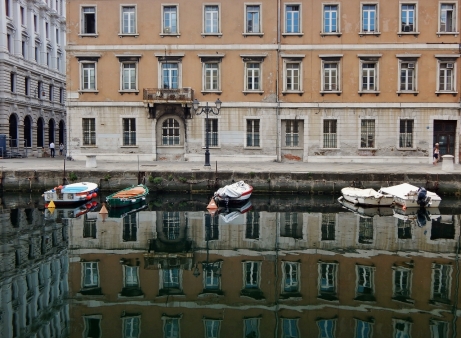 James Joyce and I. (Photo: BM)

Throwback Thursday: winter 2012 when I went to Trieste to fetch amore from the train station for the first time. (Photo: MC)

Dad in his element and an optimistic seagull. Now read the poem below.

Just in time I remembered that I’ve got a poem to write for the A and I Poetry Challenge. Luckily I was in Trieste yesterday where poetry tops the daily news. The challenge tells us to “turn on the radio to any channel. Write a poem … END_OF_DOCUMENT_TOKEN_TO_BE_REPLACED

This week for Cee’s challenge, instead of giving points to the photos according to their components like last week, I’ve chosen only two things that (nearly) all my photos have in common: sea inhabitants and a wall.  First, here is Cee’s photo for Week 2 of … END_OF_DOCUMENT_TOKEN_TO_BE_REPLACED

Another tribute to my celebrating sister and all who cook since feeding others is a gesture of true love for humanity. This is how my sister prepared for her party last night: by making three kinds of savoury pastry called burek, one with potatoes, one … END_OF_DOCUMENT_TOKEN_TO_BE_REPLACED

But especially today. While you are rushing to meet the Year of the Answer next year, here are my best wishes in the form of different objects and sights. Let’s see. First, here is this beauty for you and the best thing about it is … END_OF_DOCUMENT_TOKEN_TO_BE_REPLACED

For Cee’s new photo challenge today each of my proverbial 20 photos will be graded and you’ll be able to guess which were taken in Italy and which in Slovenia. First, here is Cee’s original photo and I hope she doesn’t mind me reposting it. Our … END_OF_DOCUMENT_TOKEN_TO_BE_REPLACED