When I read Marina’s post at Me Exploring about how she used to travel, so many of my own memories lighted up that I just had to write some down. I love it when this happens.

I plan things, so unsurprisingly many of the places we visit have to do with Jim Morrison. Sorry, parents. And art. I consider myself an expert since I was hopping around all these museums already with my two friends a few years earlier. By the time we reach Centre Pompidou, some feeble protests are heard. It’s been tiring. One of the last stops I prepared is the new Arc de Triomphe in the modern la Défense. It made quite an impression the first time. We climb it and then parents are sent to the hotel while sister and I follow the drum beat into the urban jungle. We occupy the bench opposite the drummers. We mingle. We feel we belong, after all we are about to see Urban Species in concert, before which we would be surrounded and held to the knife point by a gang of 8-year-olds. We were sitting down so they were taller. When we stood up, they dispersed like puppies. But that came later. For now we are trying to sell to a chill bunch a watch we have found on the park floor and teach them to say Bouge de là, from the song, in Slovenian: “Spizdi, man!” They repeat after us and we all laugh. No watch deal though.

2. No sleep till London

That is Paris, but London comes one year earlier. I’m so excited about the trip and my first time on the plane that I spend the night before the departure planning it all out with the thick London map book, writing addresses in my tiny notebook. How do I do it without the internet? Tracking down the MTV address in Camden is not that difficult. I have no idea what Camden is but am about to find out. We do the tourist traps too, such as the Madame Tussauds and some rock’n’roll museum or other. The funniest part is when we spot the British Telecom Tower in the distance and walk all the way to it because we think they carry stamps. Back home we have PTT: Post, Telegraph, Telephone, all in one. Mother has a meeting in the Parliament, for work. Father does most of the ordering and chitchatting because he, who has never learned English officially, is the only one not intimidated by the accent. The English here is nothing like the one we three women know from school. They seem to suffer when they speak. All those ups and downs.

Prague is our third family city in three years. I leave out most of the preparations. We just walk around, carrying a faithful guide book everywhere until the moment when I forget it in a restaurant. I notice it ten minutes later and return but, alas, the book is not where I was reading it just earlier and nobody has seen anything. Damn the country where they steal guide books. The highlight is the visit to the Slovenian ambassador. He greets us on the stairs with a Jack Nicholson smile. He is a great entertainer, full of stories of incompetent secretaries who pour glassfuls of whisky and buy bunny rabbit napkins. Sister and I wear Doc Martens which we probably bought in Camden. We don’t have any other shoes with us. He comments that this is the first time such footwear has been seen in his home. We chase his official car around Prague to reach the venue in the Castle where a Slovenian choir is about to perform, and father is thrilled to live out some of his Hollywood chase dream sequences.

We know how it will go since we did the same around the Peloponnese peninsula the previous summer for half a month. Now we have one whole month, the largest Greek island and two Peugeots, one of them my 504. You take an island, choose the direction and follow the first road to the sea, the smaller the better. Or a dry creek if you have door-stoppers installed to make your car taller. Find a tree. Sleep under it in a sleeping bag. Wake up, swim, repeat until you’re ready to move on. Move on. We have a map and not much else. Actually three maps, Crete is long. The only roof that I need is the car roof. Some name places stick: the Samaria gorge, all eight hours of it, in my All Stars with only Greek honey-nut bars to eat and all the water I can drink flowing by. Vai with its palm grove in the east. Preveli Beach and its Vietnam feel (AS IF I’ve ever been). Matala in the south and its hot African wind and ex-hippie caves that they now charge you to view and which I ignore as much as I ignore all the ancient monuments and sleep in front of Knossos instead of entering. I only need the nature, and now I have it here all year round.

It’s years later. Times have changed and we do indeed have the internet. It’s still Greece but now I travel in pair. Every year we (i.e. I) pick an island and book accommodation, we hop on the charter plane, rent a scooter and explore the entire island in a week. It’s not random, I pick the best spots in advance by Googling, but the travelling companion also prefers smallest streets and dry creeks so it’s safe to say that those scooters see certain new places. Karpathos is chosen because it comes recommended by my favourite classmate into my ear at the last reunion. “You will not be sorry,” he says. It is not as well-known, therefore I turn to a Slovenian travel forum for the first time. I find a detailed fun account of a recent travel and respond enthusiastically, the internet noob that I am, and before I know it we are invited by this couple who went there one year ago to a nearby town to view their photos on a big screen. Not only that, we are also given five neat envelopes with photos of recipients and places where to find them. To deliver them in person. What a genius game plan! Not only we get to visit the best places, we are granted instant smiles and even some treats as a reward. We are not in touch any more, either with that couple or with each other, but I will never be sorry for this week of Karpathos.

ADD-IT: In the envelopes there were photos of the recipients and the visiting couple. I fixed it now but initially forgot to mention it.

All these travels were done in predigital times, that’s why I do the next best thing and show you some of my Prague photos from my second time there in the summer of 2012. It was much better. Pearl Jam were in town.

I haven’t even met amore yet in person. And by next April I was already living in Tuscany. The travels I do now are there and back twice a year, and heavily preplanned day trips around Tuscany that I will never see whole no matter how much I plan.

I suppose it’s best to combine the old school travelling with the new ideas – and people – that the internet brings. Not all bad at all.

These are fig trees. I wonder how tall are they now six years later.

I couldn’t shake the aggressive feel the castle gives.

This was before my door days but my eye was wondering yet.

Those statues… such display of power.

The view with cherries. 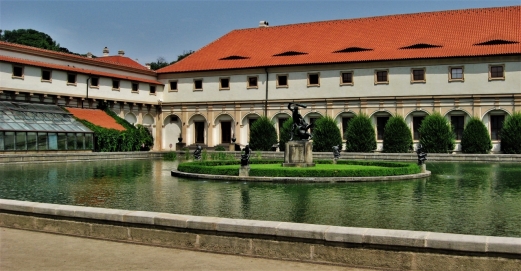 I don’t even wish to know what all those statues are doing at the Senate. A choir in practice. 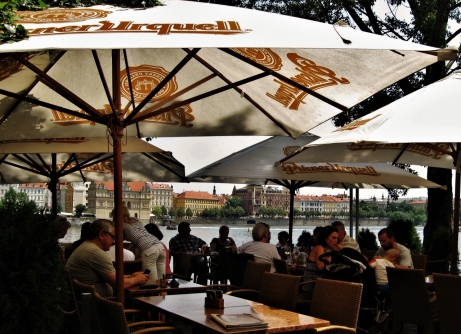 Toscana before the Toscana. 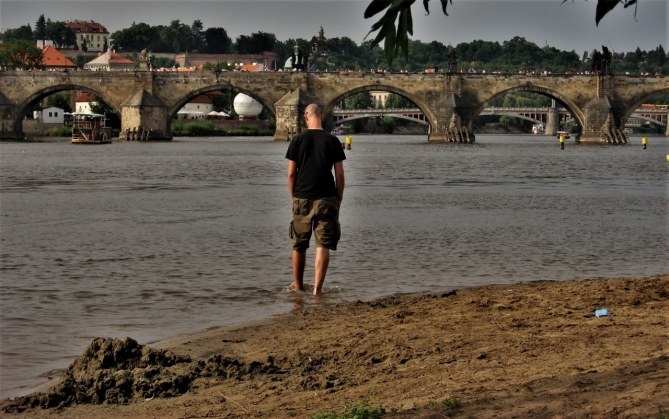 One of my three PJ buddies that I’d never seen before. There was a spare ticket and car space so I said yes. The river was cold, the air was hot.

Church of the Most Sacred Heart of Our Lord, designed by Slovenian architect Jože Plečnik and something that looks like British Telecom Tower.

Good soldier Švejk and another door.

My favourite photo from this trip, from our hostel Kolbenka. Leaving here.