I couldn’t even limit it to twenty photos. It’s stronger than me, sugar is.

Here is a revealing post from my first blog. I used to write quite a bit of those. Note the date, almost four years ago. Let’s just say that all the sweet things that followed – some of which you can see in the photos – have made me even more authorised to write a post that ends “I’m fat as a fuck-you”.

As I was assembling these luscious photos, I was thinking about how I can’t say no. The line of thought grew progressively similar to that one from ten years ago when I stopped smoking. As an owner of an addictive personality I knew exactly what happens next. The lid blows over.

And so this morning, as I put just a tiny bit of sugar in my coffee (I trust sweeteners even less), I made a mental note to crush the sugar rush, unroot the sweet tooth, put the crave to the grave, at least for a while, at least by quitting the products that make me ingest much more sugar and corn syrup and who knows what all else than I’d ever need, such as cereals, yogurts and juices.

I could see myself grow angrier and angrier, thinking about how another industry has made me an addict. And how many more there are. Addicts and industries, and it’s all for the money.

Dark chocolate will never grow old though. As for gelato… hmmmmm gelato…  Let’s start here. More info in the captions.

The irresistible land of plenty.

Seen In Montalto di Castro. What can I say… Italia! 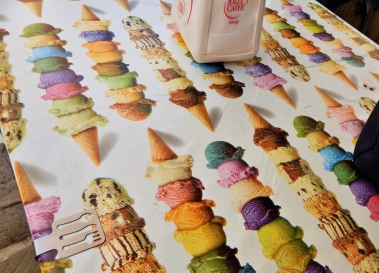 The place may be called Sweet Rome in Italian, but this is an Austrian sweetshop in Rome’s Jewish Quarter.

In Siena sis could say: and I gave some gelato to bestia as well.

On top of Rome is Monte Mario and its Zodiaco bar. The happy Americans and I had some granitas and a special coffee for Ms. Sophistication Personified. 😉

There is gelato in Ljubljana too. I will not go into comparisons… 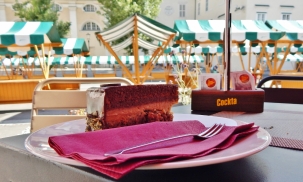 “Torta Ljubljana” at the Ljubljana Market made of typically Slovenian chestnuts, buckwheat, pumpkin seeds and figs (and chocolate).

Not far away is restaurant Ribca and their Chocolate Dream.

And again not far (as if anything is far in Ljubljana) there is Lolita and their version of Sacher cake.

This is home-made all the way and it’s father’s doing.

Here he is with the double 70 cake. Sugar love is in the family. 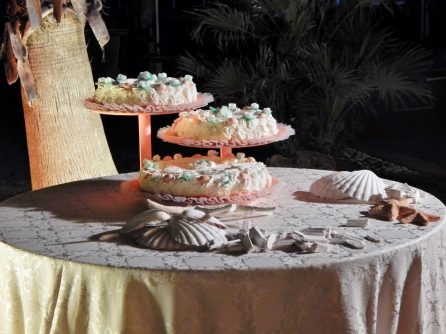 This cake you better stay away from. It’s poison. 😀 Nah, just a wedding cake. And it wasn’t even tasty.

And now three reveals. The first is amore…

…and his filled pandoro. 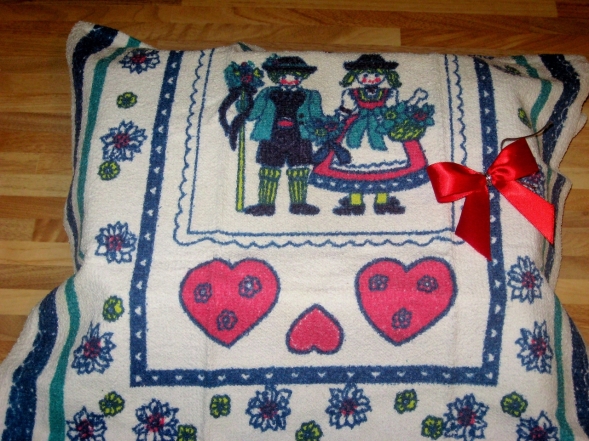 This was for amore’s 50. The Slovenian was in action. 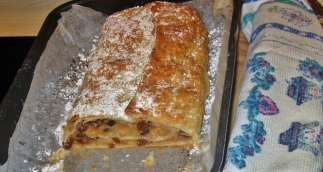 And I made strudel with pine nuts because I couldn’t find ordinary nuts in the shop. I thought it would make it unique but then amore said: “Great! My mom always put pine nuts in it.”

I made this one too, lemon and almond cake. A direct result of blogging and Almost Italian recipe (https://almostitalian.wordpress.com/2016/06/30/lemon-ricotta-and-almond-cake/)

Amore’s daughter made this apple pie in a flash. Like father like daughter. She will have her birthday soon, auguri!

It looks healthy but it’s full of sugar. Nice bowl though, amore gave me some for my birthday a few years ago.

This chocolate came for my birthday too, all the way from Slovenia. The symbol is Slovenian carnation, the taste is cranberries and the map is Tuscany. 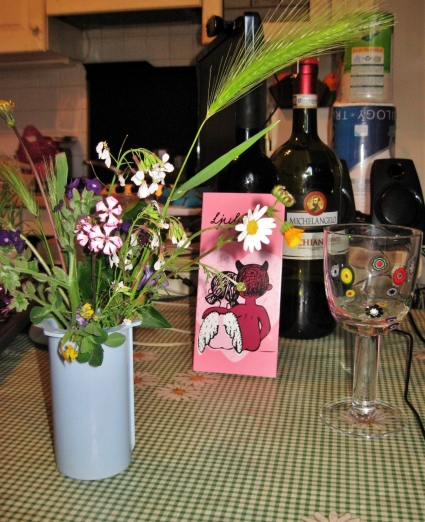 This one was taken soon after moving in. I brought this chocolate from Slovenia for amore. It says Ljubim te (which is I love you in Slovenian). The roles are not as strictly divided all the time. 😀

Nutella is never kept at home for reasons, but was bought for a special visitor when they had the name campaign. And then she said she didn’t eat sweets. Smart girl. Guess who got to eat that… Photo: MC

In response to The Daily Post’s weekly photo challenge: Sweet

28 thoughts on “WPC: My sweet addiction”